You can Download Samacheer Kalvi 9th Science Book Solutions Guide Pdf, Chapter 3 Fluids, Tamilnadu State Board help you to revise the complete Syllabus and score more marks in your examinations.

Chapter 3 Fluids Question 1.
The size of an air bubble rising up in water ……………. .
(a) decreases
(b) increases
(c) remains same
(d) may increase or decrease
Answer:
(a) decreases

Fluids 9th Science Question 2.
Clouds float in atmosphere because of their low ……………. .
(a) density
(b) pressure
(c) velocity
(d) mass
Answer:
(a) density

Fluids Lesson 9th Class Question 4.
An empty plastic bottle closed with an airtight stopper is pushed down into a bucket filled
with water. As the bottle is pushed down, there is an increasing force on the bottom as shown in graph. This is because

Samacheer Kalvi.Guru 9th Science Chapter 3 Fluids Question 2.
The shape of an object helps to determine whether the object will float.
Answer:
True.

Samacheer Kalvi Guru 9th Science Guide Chapter 3 Fluids Question 3.
The foundations of high-rise buildings are kept wide so that they may exert more pressure on the ground.
Answer:
True.

Class 9 Science Chapter 3 Solutions Question 2.
Why does a helium balloon float in air?
Answer:
Helium is much less denser than ordinary air which gives them buoyancy and thus float in air.

Science Class 9 Chapter 3 Question Answer Question 3.
Why it is easy to swim in river water than in sea water?
Answer:
Due to the presence of dissolved salts in sea water is denser than river water which makes floating easier and hence swimming is easier.

Class 9 Science Chapter 3 Solution Question 5.
State Pascal’s law.
Answer:
Pascal’s law states that an increase in pressure at any point inside a liquid at rest is transmitted equally and without any change, in all directions to every other point in the liquid.

Class 9th Science Chapter 3 Question 1.
With an appropriate illustration prove that the force acting on a smaller area exerts a greater pressure.
Answer:
Consider standing on loose sand. Your feet go deep into the sand. Now, when you lie down on the sand, you will find that your body will not go that deep into the sand. In both the cases the force exerted on the sand is the weight of your body which is the same. This force acting perpendicular to the surface is called thrust. When you stand on loose sand, the force is acting on an area equal to the area of your feet. 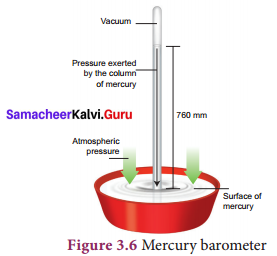 The instrument used to measure atmospheric pressure is called barometer. A mercury barometer, first designed by an Italian Physicist Torricelli, consists of a long glass tube (closed at one end, open at the other) filled with mercury and turned upside down into a container of mercury. This is done by closing the open end of the mercury filled tube with the thumb and then opening it after immersing it in to a trough of mercury. The barometer works by balancing the mercury in the glass tube against the outside air pressure.

If the air pressure increases, it pushes more of the mercury up into the tub and if the air pressure decreases, more of the mercury drains from the tube. As there is no air trapped in the space between mercury and the closed end, there is vacuum in that space. Vacuum cannot exert any pressure. So the level of mercury in the tube provides a precise measure of air pressure which is called atmospheric pressure. This type of instrument can be used in a lab or weather station. 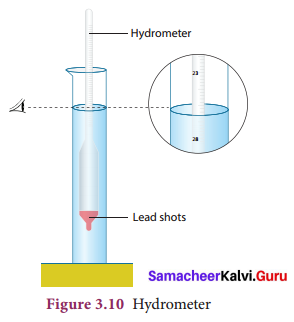 Hydrometer consists of a cylindrical stem having a spherical bulb at its lower end and a narrow tube at its upper end. The lower spherical bulb is partially filled with lead shots or mercury. This helps hydrometer to float or stand vertically in liquids. The narrow tube has markings so that relative density of a liquid can be read directly.

The liquid to be tested is poured into the glass jar. The hydrometer is gently lowered into the liquid until it floats freely. The reading against the level of liquid touching the tube gives the relative density of the liquid.

Chapter 3 Class 9 Science Pdf Question 1.
Assertion (A): To float, body must displace liquid whose weight is equal to the actual weight.
Reason (R): The body will experience no net downward force in that case.
Answer:
(a) If both assertion and reason are true and reason is the correct explanation of assertion.

Class 9 Science Chapter 3 Exercise Solutions Question 2.
Assertion (A): Pascal’s law is the working principle of a hydraulic lift.
Reason (R): Pressure is thrust per unit area.
Answer:
(b) If both assertion and reason are true but reason is not the correct explanation of assertion.

Question 2.
How does a fish manage to rise up and move down in water?
Answer:
Fish has an internal swim bladder which is filled with gas. When it needs to rise or descend, it changes the volume and its density by filling this bladder with oxygen collected from the surrounding water through gills. When the bladder is filled with oxygen gas, the fish has a greater volume, with minimal increase in weight. When the bladder is expanded, it displaces more water and so experiences a greater force of buoyancy.

Question 3.
If you put one ice cube in a glass of water and another in a glass of alcohol, what would you observe? Explain your observations.
Answer:
Ice floats in water and not in alcohol. This is because the density of ice is \(\frac { 0.917g}{ cc }\) which is lower than that of water which is 1. Whereas, the density of ethanol (alcohol) is only \(\frac { 0.789g}{ cc }\) which is lesser than ice, hence it floats in alcohol.

Question 4.
Why does a boat with a hole in the bottom would eventually sink?
Answer:
A boat with a hole at the bottom allows water to enter it, thus increasing its weight and hence it sinks. As water starts entering the boat through the hole, the boat starts to get heavier, so it starts to sink, trying to displace more water. But the water keeps coming as the hydrostatic pressure at the hole is always higher than the atmospheric pressure pushing down on the surface of the water in the boat.

Question 1.
Take two identical flasks and fill one flask with water to 250 cm3 mark and the other with kerosene to the same 250 cm3 mark. Measure them in a balance. The flask filled with water will be heavier than the one filled with kerosene. Why? The answer is in finding the mass per unit volume of kerosene and water in respective flasks.
Answer: 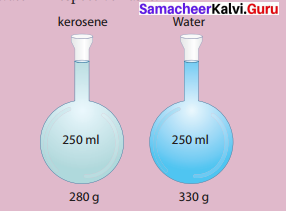 I. Answer the following.

Question 1.
Give reasons why:
a. a single nail pricking the body is painful when compared to lying on a bed of nails.
b. cutting edges of knife and axes are sharpened.
c. heavy trucks are fitted with 6 to 8 wheels
Answer:
a. In a nail bed, the weight is evenly distributed among numerous nails, so that the pressure exerted by each nail is not enough to puncture a person’s skin. If its only a single nail, the entire force created by the weight of the body would be distributed over a very small area presented by the tip of one nail. In this case the force per unit area will be great and can puncture the skin.
b. Knives and axes are sharpened because when the area decreases the pressure increases. Hence a small force is enough to cut an object.
c. As area increases pressure decreases. So weight of the truck exerts less pressure on the road.

Question 3.
In petrol bunks, in what unit is tyre pressure measured?
Answer:
The tyre pressure is measured in units of psi. it stands for pascal per inch. 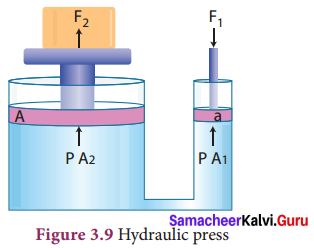 Question 5.
What is Artisan aquifer?
Answer:
An artesian aquifer is a confined aquifer (an underground water bearing permeable rocks) containing groundwater that will flow upwards out of a well without the need for pumping. In recharging aquifers, this happens because the water table at its recharge zone is at a higher elevation than the head of the well.

Thus, the ratio of mass of a given volume of a substance to the mass of an equal volume of water at 4°C also denotes relative density.

Question 7.
What is lactometer? Explain its principle and working.
Answer:
One form of hydrometer is a lactometer, an instrument used to check the purity of milk. The lactometer works on the principle of gravity of milk. The lactometer consists of a long graduated test tube with a cylindrical bulb with the graduation ranging from 15 at the top to 45 at the bottom. The test tube is filled with air. This air chamber causes the instrument to float. The spherical bulb is filled with mercury to cause the lactometer to sink up to the proper level and to float in an upright position in the milk.

Inside the lactometer there may be a thermometer extending from the bulb up into the upper part of the test tube where the scale is located. The correct lactometer reading is obtained only at the temperature of 60°C. A lactometer measures the cream content of milk.

More the cream, lower the lactometer floats in the milk. The average reading of normal milk is 32. The lactometers are used highly at milk processing units and at dairies.

Question 9.
State and explain Archimedes principle. Name the devices based on this principle.
Answer: 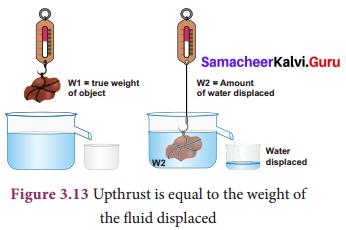 Archimedes principle is the consequence of Pascal’s law. It states that a body immersed in a fluid experiences a vertical upward buoyant force equal to the weight of the liquid it displaces.

When a body is partially or completely immersed in a fluid at rest, it experiences an upthrust which is equal to the weight of the fluid displaced by it. Due to the upthrust acting on the body, it apparently loses a part of its weight and the apparent loss of weight is equal to upthrust.

Thus for a body either partially or completely immersed in a fluid,
upthrust = weight of the fluid displaced
= apparent loss of body weight
Apparent weight of an object = True weight of an object in air – upthrust (weight of water displaced)
Devices based on Archimedes principle are – hydrometers, lactometers, balloons, boats and ships, submarines, etc.