You can Download Samacheer Kalvi 9th Social Science Book Solutions Guide Pdf, Tamilnadu State Board help you to revise the complete Syllabus and score more marks in your examinations.

Social 9th Guide Question 7.
Many million years ago, India was a part of the super continent ………….
(a) Gondwana
(b) Laurasia
(c) Panthalasa
(d) Pangea
Answer:
(a) Gondwana

9th Social Guide 2020 Question 8.
The movement of plates that creates stress and tension in the rocks causing them to stretch and cracks result in ………….
(a) fold
(b) fault
(c) mountain
(d) earthquake
Answer:
(b) fault

9th Social Science Guide Question 10.
The point of origin of an Earthquake is called the …………..
(a) epicentre
(b) focus
(c) seismic wave
(d) magnitude
Answer:
(a) epicentre

III. Consider the given statements.

IV. Answer the following in one or two sentences.

Chapter 1 Lithosphere – I Endogenetic Processes Question 1.
Write a brief note on the various spheres of the Earth.
Answer:
(i) The Earth is divided into Biotic and ABiotic Spheres.

9th Std Social Science Guide Pdf Question 2.
Mention the layers of the interior of the Earth.
Answer:
The structure of the Earth’s interior is divided into three layers namely the crust, the mantle and the core.

9th Std Social Science Guide Pdf English Medium Question 3.
What is pedosphere?
Answer:
The ‘Pedosphere’ is part of the lithosphere made up of soil and dirt. It exists at the interface of lithosphere, atmosphere, hydrosphere and biosphere.

9th Social Science Book Back Answers Question 5.
Write a note on Fold and fault?
Answer:
Folding: Due to lateral compressional forces, the plates are forced to move upwards and downwards. This is called‘Folding’.
Faulting: The movement of plates also create stress and tension in the rocks, causing them to stretch and crack. This called ‘faulting’.

9th Social Guide Pdf Question 7.
What is a Volcano? Mention its major components.
Answer:
A volcano is a vent or an opening on the surface of the Earth’s crust through which hot solid, liquid and gaseous materials (Magma) erupt out to the surface from the Earth’s interior.

Samacheer Kalvi Social Science 9th Std Question 8.
What is an Earthquake and how it occurs?
Answer:
Earthquakes are generally caused by the sudden vibrations in the Earth’s crust which spreads outward in all directions as waves from the source of disturbance.

Social Guide For Class 9 Samacheer Kalvi Question 9.
What are seismic waves and mention its types?
Answer:
Earthquakes generate seismic waves. The nature force and speed of these seismic waves depend on the nature of the medium through which it passes.
The major types are
(a) Primary (or) P waves
(b) Secondary (or) S waves
(c) Surface waves (or) L waves.

V. Give Reasons for the following.

VII. Write answers in a Paragraph.

Crust: Crust is the outer layer of the Earth, where we live. It is the skin of our Earth, which ranges between 5 to 30 km. It is the solid and rigid layer of the Earth. The thickness of the crust is greater below the continents than the ocean floor. The crust is classified as continental crust and oceanic crust. The major elements of crust are Silica (Si) and Aluminium (Al) and thus, it is termed as SIAL.

Core: The core is the innermost and hottest layer of the Earth which lies below the mantle.
It is composed mainly of Nickel (Ni) and Iron (Fe). Hence it is called NIFE. The core is divided into Solid inner core and Liquid outer core. The presence of large quantities of iron in the core is responsible for the Earth’s gravitational force. As the Earth rotates on its axis, the liquid outer core spins over the solid inner core and generates the Earth’s magnetic field.
This is responsible for the functioning of the magnetic compass. Due to high pressure, the materials in the inner core are unable to move and hence remain solid.

Social Science 9th Guide Question 2.
Write a note on the internal and external processes of Earth.
Answer:
The formation and deformation of landforms on the surface of the Earth is a continuous activity of two broad processes i.e. internal and external. These processes cause stress and deformation on Earth materials and finally bring changes on the surface of the Earth. These are referred as Geomorphic Processes.

The forces that act from the Earth’s interior towards the Earth’s surface are called Internal processes or Endogenetic processes. These forces build the landscape and create topographic relief.

The forces that act on the surface of the Earth due to natural agents like running water, glacier, wind, waves etc. are called External processes or Exogenetic processes. These external processes tear the landscape down into relatively low elevated plains.

Samacheer Kalvi 9th Social Guide Question 3.
How are volcanoes classified based on the periodicity of their eruptions?
Answer:
Based on the periodicity of eruptions, volcanoes are classified into
(i) Active volcano,
(ii) Dormant volcano
(iii) Extinct volcano.
(i) Active Volcano: Active volcanoes are those which constantly eject volcanic lava, gases and fragmented materials. (e.g.) Mount St. Helens in the United States.

(ii) Dormant Volcano: Volcanoes that do not show any sign of volcanic activity for a long period of time are known as dormant volcanoes. Sometimes there may be a sudden explosion. which may cause unimaginable loss to life and property (e.g. ) Mt. Fuji, Japan.

(iii) Extinct or Dead Volcano: When a volcano permanently stops its volcanic activity, then it is called as extinct or dead volcano (e.g.) Mt. Kilimanjaro, Tanzania.
Volcanoes can also be classified based on their structure and composition as composite volcano, shield volcano and dome volcano.

9th Standard Social Science Question 4.
Explain the effects of Volcanoes.
Answer:
Constructive Effects: Volcanic materials enrich the soil fertility that promotes agricultural activities. The hot volcanic region helps in generating geothermal energy. Many dormant and active volcanoes are the most attractive tourist spots of the world. Most of the volcanic materials are used as building materials.

Destructive Effects: Volcanic eruption causes Earthquakes, fast floods, mud slide and rock fall. Lava can travel very far and bum, bury, or damage anything in its path. The large amount of dust and ash makes breathing hard and irritable. Volcanic emptions can alter the weather conditions and disrupt transport (Iceland volcanic eruption) in and around the volcanic region.

On the given outline map of the world, mark the following:
(a) Pacific Ring of fire
(b) Earthquake-prone zones (any two)
(c) Locate any two active volcanoes of the world
(d) Himalayas and Alps ranges
(e) Rift valley of East Africa
Answer:
(a) Pacific Ring of fire: It is a major area and an arc in the basin of the Pacific ocean where many earthquakes and volcanic emptions occur. 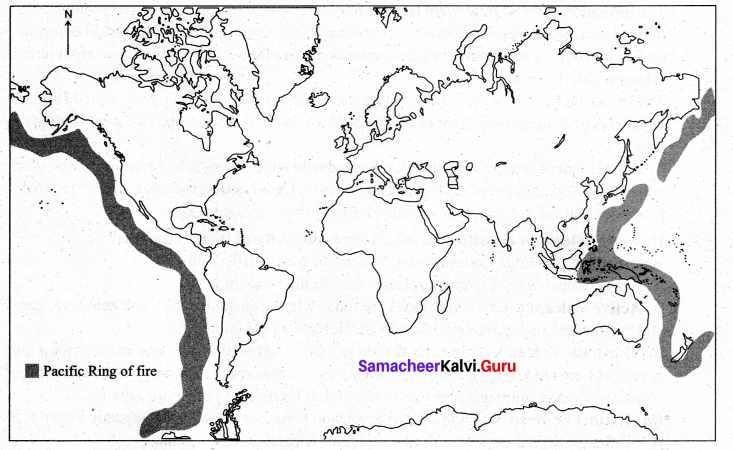 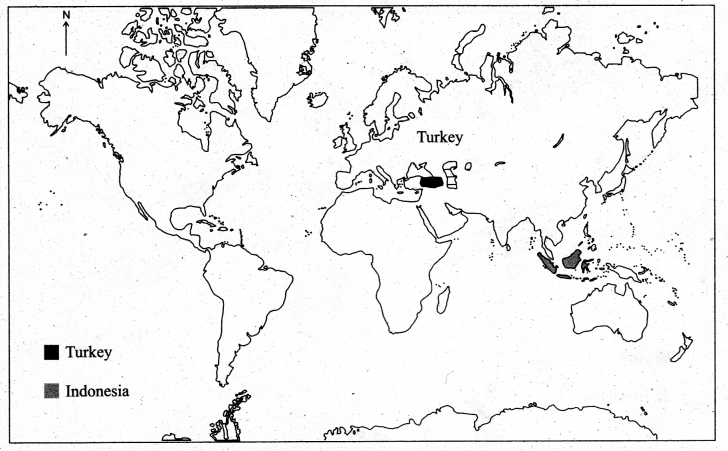 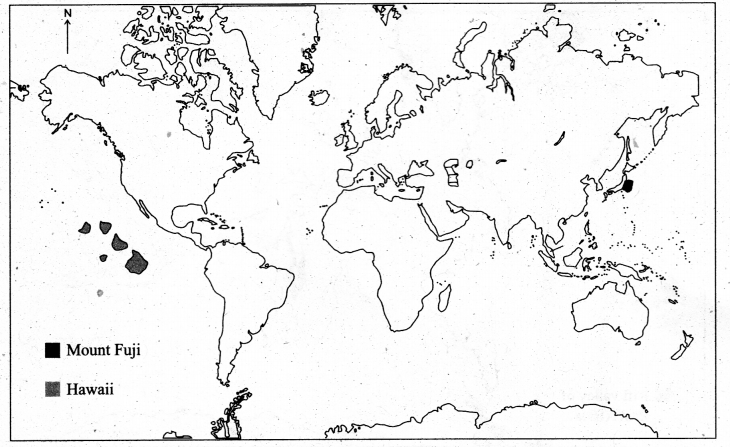 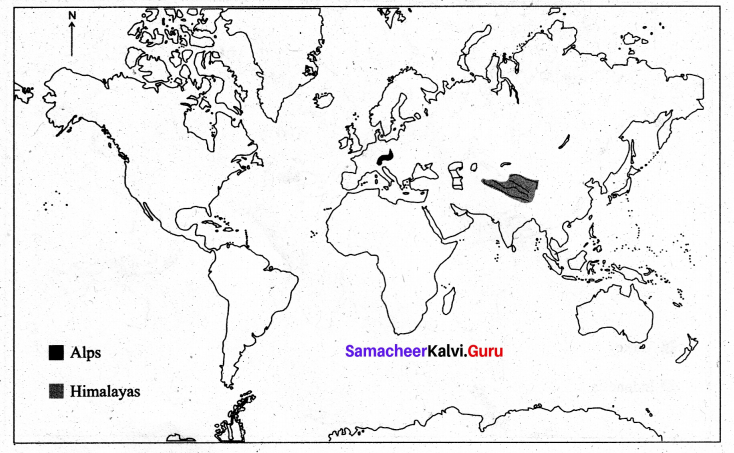 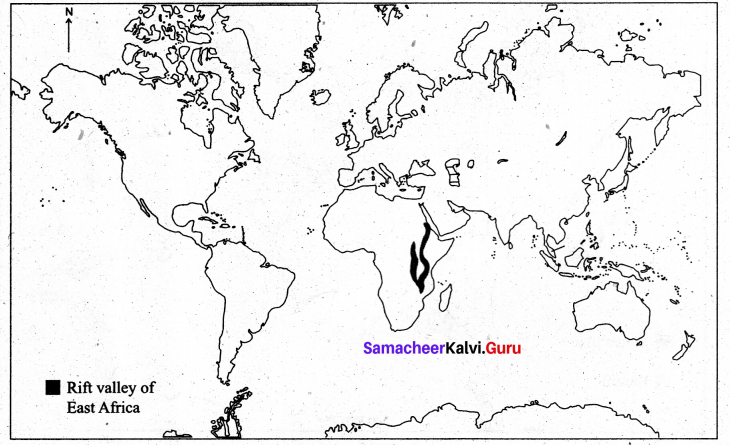 Question 1.
Pacific Ring of Fire — Most seismically and volcanically active. Why?
Answer:
The Pacific Ring of fire is an arc around the Pacific Ocean. It is associated with a nearly continuous series of oceanic trenches, volcanic arcs, and volcanic belts and plate movements. It has 452 volcanoes (more than 75% of the world’s active and dormant volcanoes). The Ring of Fire is a direct result of plate tectonics: the movement and collisions of lithospheric plates. That is why it is the most seismically and volcanically active zone in the world.

Imagine that you feel tremors or shocks in your locality. What will be your role in saving • lives from destruction? List out the Do’s and Don’ts.
Dos and don’ts during an earthquake
Do’s

Question 1.
Collect a few rock samples from your area and classify them on the basis of what you have learnt.
Answer:
You can do this activity under the guidance of your teacher.

Question 2.
Narrate the processes involved in the given rock cycle diagram in your own words.
Answer: 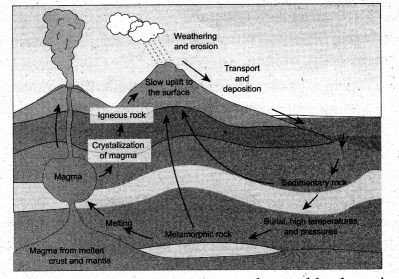 Rocks are continually changing from one type to another and back again. Rock Cycle is the geologic process that describes the transition of rocks between the three rock types: igneous, sedimentary, and metamorphic. The forces inside the earth bring the rocks closer to the surface. Here the rocks are weathered, eroded and compacted. Then the forces on the earth sink the rocks. Back down, the rocks are heated, pressed and melted. So the elements that create rocks are constantly being recycled.

Question 3.
Here is a list of a few mountains.
• Ural Mountains, Andes Mountains, Vindhya Range, Alps mountains
• Satpura range, Rocky Mountains, Sierra Nevada.
• Identify and Locate with help of atlas
Answer:
You can identify and locate the above mentioned mountains with the help of an atlas or Internet.

Question 4.
(a) Arrange a few books one above the other on a table. Just shake the table and observe what happens.
Answer:
You can do this activity under the guidance of your teacher.

(b) Ask two students to hold two ends of a rope. Instruct one of them to shake the rope, while the other holds it lightly and then firmly. What do you observe?
Answer:
You can do this activity under the guidance of your teacher.

Question 5.
Take a bottle filled with soda. Give it a few shakes. Now twist the cap open. What do you observe?
Answer:
A capped bottle is under a uniform pressure. The molecules of carbon dioxide gas and liquid are at an equilibrium (due to a uniform pressure). When we shake the bottle, the contents are pressurized. So when the cap is opened, the liquid comes out with a force and fizz.

Question 2.
The presence of large quantities of …………… in the core is responsible for the Earth’s Gravitational force.
(a) Aluminium
(b) Magnesium
(c) Iron
(d) Silica
Answer:
(c) Iron

Question 10.
Composite volcanoes are commonly found in the ………….. ocean.
(a) Pacific
(b) Southern
(c) Indian
(d) Atlantic
Answer:
(a) Pacific

II. Match the following.
(a)

III. Consider the given statements

IV. Answer the following questions in one or two sentences.

Question 1.
What is Hydrosphere?
Answer:
The Hydrosphere is the watery part of the Earth’s surface including oceans, rivers, lakes and water vapour.

Question 2.
What are fossils?
Answer:
The bodies of plants and animals that fall on the sedimentary rock deposits get embedded in the layers and form fossils.

Question 3.
What do you know about the Active Volcano?
Answer:
Active volcanoes are those which constantly eject volcanic lava, gases and fragmented materials, e g., Mount St. Helens in the United states.

Question 4.
What is Geology?
Answer:
The science that deals with the physical structure and substances of the earth their history and the processes which act on them.

Question 5.
What do the internal processes generate?
Answer:

V. Give reasons for the following.

Question 2.
Why does the lava flow out in all directions in shield volcano?
Answer:

VII. Write answers in a Paragraph.

Question 1.
Give an account of‘Tsunami’
Answer:
The word ‘Tsunami’ is a Japanese term, meaning harbour waves. It is adopted to describe large seismically generated sea waves caused by Earthquakes, submarine explosions and landslides. These waves travel at a great speed (more than 500 km per hour) and the length of the waves exceeds 600 km. These waves reach to a height of more than 15 m near the sea shore and are capable of causing destruction along the coastal area.

The 2004 Indian Ocean Earthquake that caused tsunami is the sixth-deadliest natural disaster which travelled at a speed of 600 km per hour with an estimated death toll of 2,80,000. The Earthquake which occurred near Indonesia at 00.58 hours took nearly 7 hours to reach Chennai.