Question 7.
The inhibitory effect of oxygen in photosynthesis was first discovered by ……………………….
(a) Warburg
(b) Van Helmont
(c) Dutrochet
(d) Desaussure
Answer:
(a) Warburg

Question 14.
Nitrogen is a Macronutrient – Justify.
Answer:
Nitrogen (N) is required by the plants in greatest amount. It is an essential component of proteins, nucleic acids, amino acids, vitamins, hormones, alkaloids, chlorophyll and cytochrome.

Question 16.
Explain the three different types of trailers with an example.
Types of Trailers: 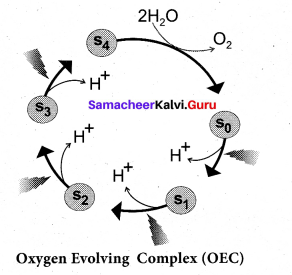 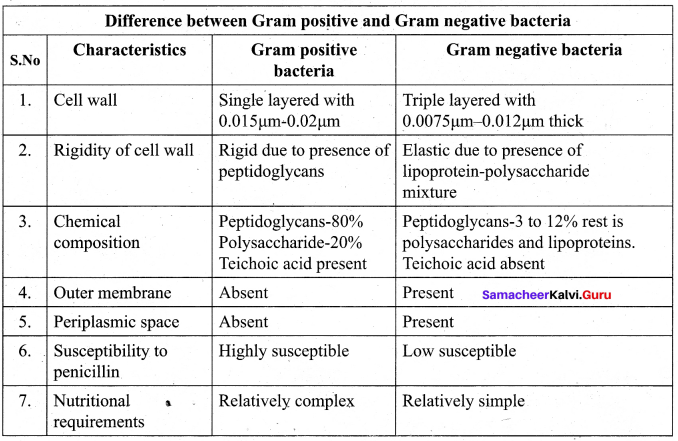 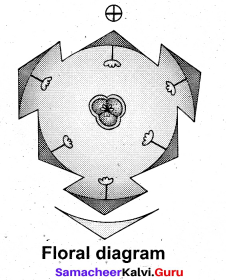 Classify and explain the plants based on photoperiodism.
Answer:

Question 2.
Which of the following snakes is non-poisonous?
(a) Cobra
(b) Krait
(c) Viper
(d) Python
Answer:
(d) Python

Question 9.
What is cladogram?
Answer:
A tree diagram which represents the evolutionary relationship among organisms in known as cladogram.

Question 11.
Draw the diagram of Balanoglossus and label the parts.
Answer: 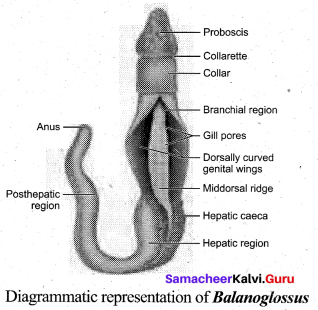 Question 13.
What is Osmotic regulation?
Answer:
Osmotic regulation is the control of tissue osmotic pressure which acts as a driving force for movement of water across biololgical membranes.

Question 14.
What is periosteum?
Answer:
The external surface of the bone is covered by a double layered membrane called periosteum.

Question 15.
What are the three domains of life?
Answer:
Three domain classification was proposed by Carl Woese (1977) and his co-workers. They classified organisms based on the difference in 16s rRNA genes. This adds the taxon domain higher than the kingdom. In this system, prokaryotes are divided into two domains-bacteria and Arachaea. All eukaryotes are placed under the domain Eukarya. Archae appears to have common features with Eukarya. Archaea differ from bacteria in cell wall composition and differ from bacteria and eukaryotes in membrane composition and rRNA types.

Question 16.
Define typhlosole.
Answer:
The dorsal wall of the ftitestine of earthworm is folded into the cavity as the typhlosole.
This fold contains blood vessels and increases the absorptive area of the intestine.

Question 17.
Differentiate parazoa and eumetazoa.
Parazoa :
These include multicellular animals whose cells are loosely arranged without the formation of tissues or organs, e.g. sponges

Eumetazoa :
These include multicellular animals with well defined tissues, organs and organ systems.

Question 18.
Draw the diagram and label the parts of neuron. 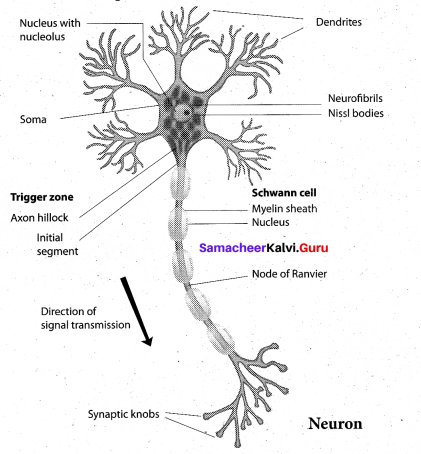 Question 19.
What are the different types of silk worms?
Answer:

Question 20.
Describe class Mammalia.
Answer:
(L. Mamma – Breast)
They are found in a variety of habitats.Their body is covered by hair, a unique feature of mammals. Some of them are adapted to fly or live in water. Presence of mammary glands is the most unique feature of mammals. They have two pairs of limbs adapted for walking, running, climbing, burrowing, swimming and flying.

The heart is four chambered and possess a left systematic arch. Mature RBCs are circular, biconcave and non nucleated. Mammals have a large brain when compared to other animals They show greatest intelligence among all animals. Their kidneys are metanephric and are ureotelic. All are homeothermic, sexes are separate and fertilization is internal.

Asthma-It is characterized by narrowing and inflammation of bronchi and bronchioles and difficulty in breathing.Common allergens for asthma are dust, drugs, pollen grains, certain food items like fish, prawn and certain fruits etc.

Emphysema- Emphysema is chronic breathlessness caused by gradual breakdown of the thin walls of the alveoli decreasing the total surface area of a gaseous exchange, i.e., widening of the alveoli is called emphysema. The major cause for this disease is cigarette smoking, which reduces the respiratory surface of the alveolar walls.

Bronchitis-The bronchi when it gets inflated due to pollution smoke and cigarette smoking, causes bronchitis. The symptoms are cough, shortness of breath and sputum in the lungs.

Pneumonia-Inflammation of the lungs due to infection caused by bacteria or virus is called pneumonia. The common symptoms are sputum production, nasal congestion, shortness of breath, sore throat, etc.

Tuberculosis-Tuberculosis is caused by Mycobacterium tuberculate. This infection mainly occurs in the lungs and bones. Collection of fluid between the lungs and the chest wall is the main complication of this disease.

Long exposure can give rise to inflammation leading to fibrosis. Silicosis and asbestosis are occupational respiratory diseases resulting from inhalation of particle of silica from sand grinding and asbestos unto the respiratory tract. Workers, working in such industries must wear protective masks.

Question 21.
Explain the Refractive errors of eye or defects of human eye.
Answer:
Refractive errors of eye :
Myopia (near sightedness): The affected person can see the nearby objects but not the distant objects. This condition may result due to an elongated eyeball or thickened lens; so that the image of distant object is formed in front of the yellow spot. This error can be corrected using concave lens that diverge the entering light rays and focuses it on the retina.

Hypermetropia (long sightedness): The affected person can see only the distant objects clearly but not the objects nearby.This condition results due to a shortened eyeball and thin lens; so the image of closest object is converged behind the retina. This defect can be _ overcome by using convex lens that converge the entering light rays on the retina.

Cataract: Due to the changes in nature of protein, the lens becomes opaque. It can be corrected by surgical procedures. 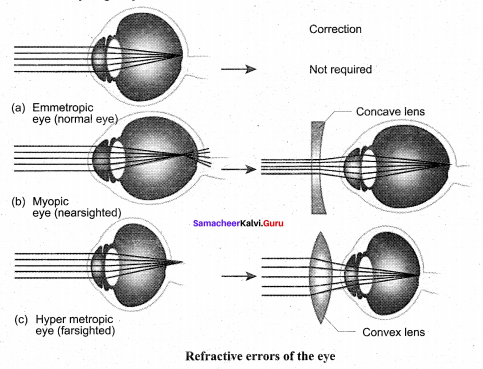 Briefly explain the structure of thyroid gland.
Answer:
The butterfly shaped thyroid gland is a bilobed gland located below the laryns on each side of upper trachea. It is the largest endocrine gland in the body. Its two lateral lobes are connected by a median tissue mass called isthmus. Each lobe is made up of many lobules.

The lobules consist of follicles called acini. Each acinus is lined with glandular, cuboidal or squamous epithelial cells. The lumen of acinus is filled with colloid, a thick glycoprotein mixture consisting of thyroglobulin molecules. 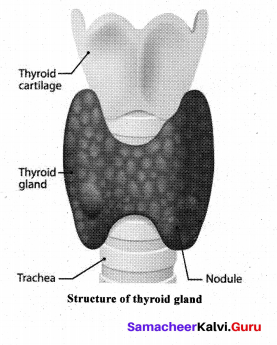