Question 4.
Which one of the following is a developed nation?
(a) Mexico
(b) Ghana
(c) France
(d) Srilanka
Answer:
(c) France

Question 10.
Choice is always constrained or limited by the ………………. of our resources.
(a) scarcity
(b) supply
(c) demand
(d) abundance
Answer:
(a) scarcity

Question 19.
The head quarters of southern Railway is
(a) Tiruchirapalli
(b) Chennai
(c) Madurai
(d) Coimbatore
Answer:
(b) Chennai

Question 21.
Explicit cost – define
Answer:
Payment made to other for the purchase of factors of production is known as Explicit Costs. It refers to the actual expenditures of the firm to purchase or hire the inputs the firm needs.

Question 25.
What do you mean by interest?
Answer:

Question 27.
What is meant by Economics?
Answer:

Question 30.
Point out any one feature of Indian Economy.
Answer:
India has a mixed economy:

Nature of entry of competitors in Monopoly:

Question 33.
What are the steps involved in executing a MS Excel Sheet?
Answer:

Worksheet:
MS – Excel work sheet is a table like document containing rows and columns with data
and formula

There are four kinds of calculation operators. They are:

Question 34.
Differentiate between firm and Industry.
Firm
A firm refers to a single production unit in an industry, producing a large or a small quantum of a commodity or service, and selling it at a price in the market.
Its main objective is to earn a profit. There may be other objectives as described by managerial and behavioral theories of the firm.

Question 35.
What are the measures taken towards Globalization?
Answer:

Question 37.
The Handicrafts declined in India in British Period. Why?
Answer:

Question 38.
What are the renewable sources of power in Tamil Nadu?
Answer:
Energy: 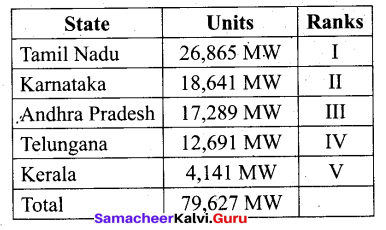 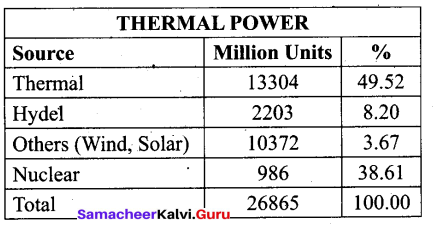 Southern Tamil Nadu is considered as one of the most suitable regions in the country for developing solar power projects.

Question 41.
(a) Illustrate the Ricardian Theory of Rent.
Answer: 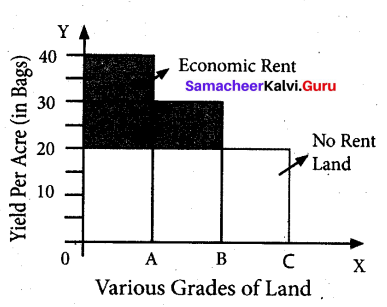 In this process, the crucial decisions include:

For whom to produce?

(b) List out the properties of iso-quants with the help of diagrams.
Answer:
Properties of Iso-quant Curve:

1. The iso-quant curve has negative slope.
It slopes downwards from left to right indicating that the factors are substitutable. If more of one factor is used, less of the other factor is needed for producing the same level of output. In the diagram combination A refers to more of capital K5 and less of labour L2. As the producer moves to B, C, and D, more labour and less capital are used.

2. Convex to the origin.
This explains the concept of diminishing Marginal Rate of Technical Substitution (MRTSlk). For example, the capital substituted by 1 unit of labour goes on decreasing when moved from top to bottom. If so, it is called diminishing MRTS. Constant MRTS (straight line) and increasing MRTS (concave) are also possible. It depends on the nature of iso-quant curve. 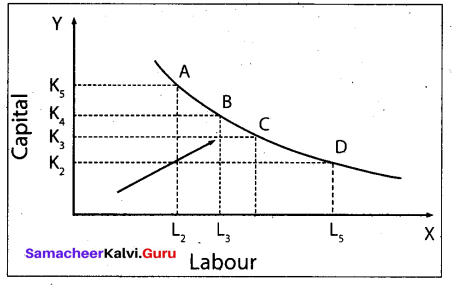 3. Non inter-section of Iso-quant curves.
For instance, point A lie on the isoquants IQ1 and IQ2 But the point C shows a higher output and the point B shows a lower level of output IQ1 If C = A, B = A, then C = B. But C > B which is illogical. 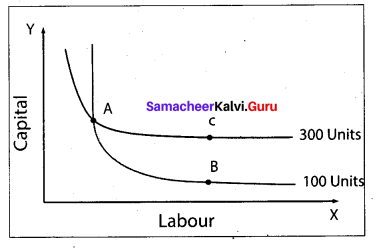 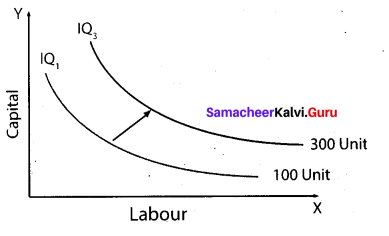 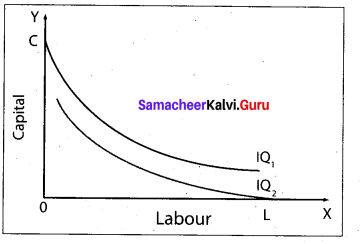 (iv) Absence of Transport Cost
The prevalence of the uniform price is also due to the absence of the transport cost.

(vii) No Government Intervention
There is no government regulation on supply of raw materials, and in the determination of price etc.

(b) Explain the Marginal productivity theory of distribution.
Answer:
Introduction:

The Marginal Productivity Theory of Distribution states that

(iv) Money Lenders and High Rate of Interest:
The rate of interest charged by the local money lenders is very high and the compounding
of interest leads to perpetuate indebtedness of the farmer.

On the right hand side of the diagram, the original price is OP1 and the quantity demanded is OQ1 . Due to changes in other conditions, the quantity purchased has increased to OQ2 Thus the demand curve shifts to the right d1d1. This is called increase in demand.

‘Extension’ and ‘Contraction’ of demand follow a change in price. Increases and decreases in demand take place when price remains the same and the other factors bring about demand changes.

Question 45.
(a) What is Duopoly and characteristics of Duopoly?
Answer:
Duopoly is a special case of the theory of oligopoly in which there are only two sellers. Both the sellers are completely independent and no agreement exists between them. Even though they are independent, a change in the price and output of one will affect the other, and may set a chain of reactions. A seller may, however, assume that his rival is unaffected by what he does, in that case he takes only his own direct influence on the price.

(b) Explain the Marginal Productivity Theory of Distribution.
Answer:
Introduction:

The Marginal Productivity Theory of Distribution states that

Question 46.
(a) Explain the objectives and characteristics of SEZs.
Answer:

(b) Describe the qualitative aspects of population.
Answer:
Tamil Nadu stands sixth in population with 7.21 crore against India’s 121 crore as per 2011 censes. Tamil Nadu’s population is higher than that of several countries according to UN report. Tamil Nadu population 7.2 [crores] in 2017.

The explanation arid analysis of production possibility curve is based upon certain assumptions, some of them are following:

The schedule suggests that if all resources are thrown into the production of food, a maximum of 500 tons of food can be produced, given the existing technology. If on the other hand, all resources are instead used for producing cars, 25 cars can be produced. In between these two extreme possibilities exist. If we are willing to give up some food, we can have some cars.

Problems of the economy

2. Solution of central problems:
The central problems of an economy can be explained with the help of PPC. The solution of problem of what to produce involves the decision regarding the choice of location on the production possibility carves. A production combination represented by any point inside the PPC indicates that the economy is using inefficient methods of production and inefficient combination of resources. 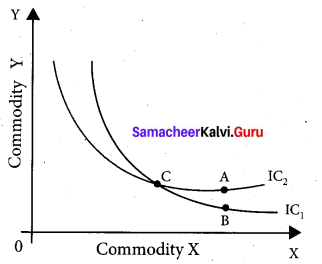 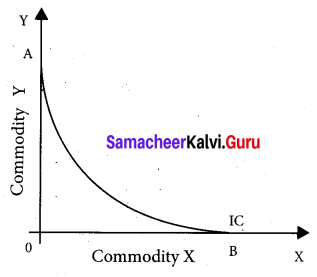 4. Indifference curves do not touch the horizontal or vertical axis.
If they touch the axis, it violates the basic assumption that the consumer purchases two commodities in a combination.