Question 11.
The internal energy of an ideal gas depends on ………..
(a) pressure
(b) volume
(c) temperature
(d) size of molecules
Answer:
(c) temperature

Question 19.
There are two identical balls of same material, one being solid and the other being hollow. How will you distinguish them without weighting?
Answer:
Solid and hollow balls can be differentiated by different methods
(a) by spinning than using equal torques
(b) by determining their moment of inertia ie Ih > Is
(c) by rolling them down is an inclined plane
ie, when torques are equal angular acceleration of hollow must be smaller than that of solid. Similarly, on rolling, solid ball will reach the bottom before the hollow ball.

Question 20.
In a dark room would you be able to tell whether a given note had been produced by a Piano or a Violin?
Answer:
Yes, in a dark room we can easily identify a sound produced by a Piano or a Violin by using the knowledge of timber or quality of sound. The two sources even though having the same intensity and fundamental frequency will be associated with different number of overtones of different relative intensities. These overtones combine and produce different sounds which enables us to identify them.

Question 28.
How do you classify the physical quantities on the basis of dimension?
Answer:

Consider a U-shaped glass tube which consists of two open arms with uniform cross sectional area A. Let us pour a non-viscous uniform incompressible liquid of density ρ in the U-shaped tube to a height h as shown in the figure. If the liquid and tube are not disturbed then the liquid surface will be in equilibrium position O. It means the pressure as measured at any point on the liquid is the same and also at the surface on the arm (edge of the tube on either side), which balances with the atmospheric pressure. Due to this the level of liquid in each arm will be the same. By blowing air one can provide sufficient force in one arm, and the liquid gets disturbed from equilibrium position O, which means, the pressure at blown arm is higher than the other arm. This creates difference in pressure which will cause the liquid to oscillate for a very short duration of time about the mean or equilibrium position and finally comes to rest, Time period of the oscillation is
T = 2π\(\sqrt{\frac{l}{2g}}\) second

Question 30.
What are the factors affecting the surface tension of a liquid.
Answer:

Question 31.
Write a note on Brownian motion.
Answer:
Brownian motion is due to the bombardment of suspended particles by molecules of the surrounding fluid. But during 19th century people did not accept that every matter is made up of small atoms or molecules. In the year 1905, Einstein gave systematic theory of Brownian motion based on kinetic theory and he deduced the average size of molecules.

According to kinetic theory, any particle suspended in a liquid or gas is continuously bombarded from all the directions so that the mean free path is almost negligible. This leads to the motion of the particles in a random and zig-zag manner. But when we put our hand in water it causes no random motion because the mass of our hand is so large that the momentum transferred by the molecular collision is not enough to move our hand. 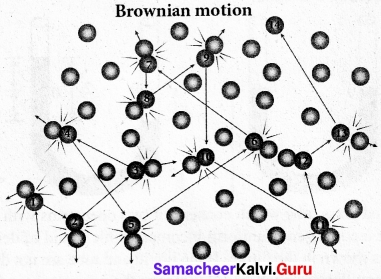 Question 32.
What is the acceleration of the block and troller system as the figure. If the Co-efficient of kinetic friction between the trolley and the surface is 0.04? Also calculate friction in the string. Take G = 10 ms-2, mass of the string is negligible.
Answer:

If the block of mass m is attached to the other end of spring, then the spring elongates by a length. Let F, be the restoring force due to stretching of spring. Due to mass m, the gravitational force acts vertically downward. We can draw free-body diagram for this system as shown in figure. When the system is under equilibrium, 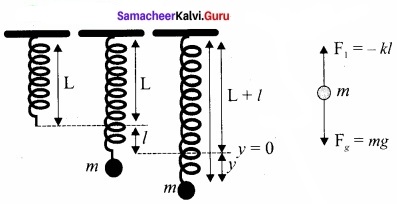 The above equation is known as Poiseuille’s equation for the flow of liquid through a narrow tube or a capillary tube. This relation holds good for the fluids whose velocities are lesser than the critical velocity (vc).

Question 35 (a).
Describe briefly simple harmonic oscillation as a projection of uniform circular motion?
Answer:
Consider a particle of mass m moving with unifonn speed v along the circumference of a circle whose radius is r in anti-clockwise direction (as shown in figure). Let us assume that the origin of the coordinate system coincides with the center O of the circle.

This means that we can associate a map (or a relationship) between uniform circular (or revolution) motion to vibratory motion. Conversely, any vibratory motion or revolution can be mapped to unifonn circular motion. In other words, these two motions are similar in nature.

The projection of uniform circular motion on a diameter of SHM:
As a specific example, consider a spring mass system (or oscillation of pendulum). When the spring moves up and down (or pendulum moves to and fro), the motion of the mass or bob is mapped to points on the circular motion.

(b) State and prove Bernoulli’s theorem for a flow of incompressible non viscous and stream lined flow of fluid?
Answer:
Bernoulli’s theorem:
According to Bernoulli’s theorem, the sum of pressure energy, kinetic energy, and potential energy per unit mass of an incompressible, non-viscous fluid in a streamlined flow remains a constant. Mathematically,
\(\frac{P}{ρ}\) + \(\frac{1}{2}\)v2 + gh – constant
This is known as Bernoulli’s equation.
Proof:
Let us consider a flow of liquid through a pipe AB. Let V be the volume of the liquid when it enters A in a time t. Which is equal to the volume of the liquid leaving B in the same time. Let aA, vA and PA be the area of cross section of the tube, velocity of the liquid and pressure exerted by the liquid at A respectively.

Distance travelled by the liquid in time t is d = vAt
Therefore, the work done is W = FAd = PAaAvAt
But aAvAt = aAd = V, volume of the liquid entering at A.

Potential energy of the liquid at A,
PEA = mghA 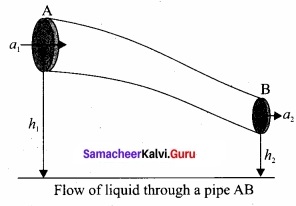 The above equation is the consequence of the conservation of energy which is true until there is no loss of energy due to friction. But in practice, some energy is lost due to friction. This arises due to the fact that in a fluid flow, the layers flowing with different velocities exert frictional forces on each other. This loss of energy is generally converted into heat energy. Therefore, Bernoulli’s relation is strictly valid for fluids with zero viscosity or non-viscous liquids. Notice that when the liquid flows through a horizontal pipe, then
h = 0 ⇒ \(\frac { P }{ \rho g } \) + \(\frac{1}{2}\) \(\frac { v^{ 2 } }{ g } \) = Constant 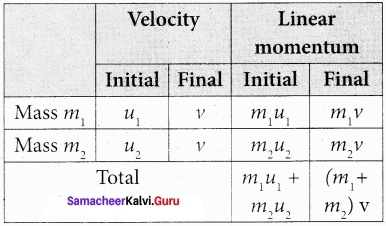 (b) Derive an expression for maximum height attained, time of flight, horizontal range for a projectile in oblique projection?
Answer: 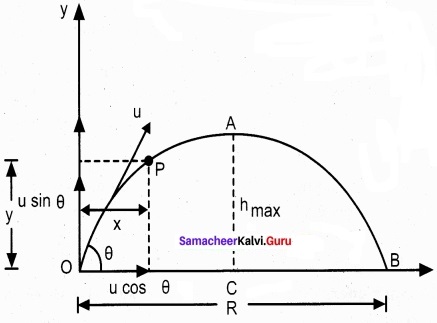 Range R = Horizontal component of velocity % time of flight = u cos θ × Tf = \(\frac{u^{2} \sin 2 \theta}{g}\)
The horizontal range directly depends on the initial speed (u) and the sine of angle of projection (θ). It inversely depends on acceleration due to gravity ‘g’.

Question 37 (a).
Explain the work-energy theorem in detail and also give three examples?
Answer:

Mayer’s relation: Consider p mole of an ideal gas in a container with volume V, pressure P and temperature T.

When the gas is heated at constant volume the temperature increases by dT. As no work is done by the gas, the heat that flows into the system will increase only the internal energy. Let the change in internal energy be dU.

Suppose the gas is heated at constant pressure so that the temperature increases by dT. If ‘Q’ is the heat supplied in this process and ‘dV’ the change in volume of the gas.
Q = pCpdT ……………. (3)

Question 38 (a).
Derive an expression of pressure exerted by the gas on the walls of the container?
Answer:
Expression for pressure exerted by a gas : Consider a monoatomic gas of N molecules each having a mass m inside a cubical container of side l.
The molecules of the gas are in random motion. They collide with each other and also with the walls of the container. As the collisions are elastic in nature, there is no loss of energy, but a change in momentum occurs. 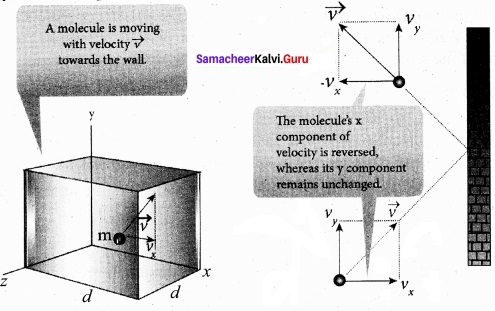 A molecule of mass m moving with a velocity \(\vec { v } \) having components (vx, vy, vz) hits the right side wall. Since we have assumed that the collision is elastic, the particle rebounds with same speed and its x-component is reversed. This is shown in the figure. The components of velocity of the molecule after collision are (-vx, vy, vz). 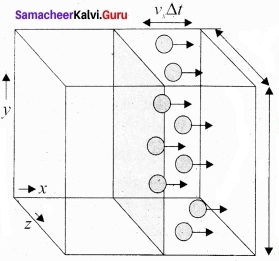 Here A is area of the wall and n is number of molecules per \(\frac{N}{V}\) unit volume. We have assumed that the number density is the same throughout the cube.

A pendulum is a mechanical system which exhibits periodic motion. It has a bob with mass m suspended by a long string (assumed to be massless and inextensible string) and the other end is fixed on a stand. At equilibrium, the pendulum does not oscillate and hangs vertically downward.

Resolving the gravitational force into its components: