Question 7.
Which function is used to print the data in dictionary format without order?
(a) dic()
(b) dict()
(c) dictionary
(d) print
Answer:
(b) dict()

Question 16.
Differentiate Interface and Implementation.
Answer:
Interface:
Interface just defines what an object can do, but won’t actually do it.

Question 20.
Write about ‘init’ functions.
Answer:
Constructor is the special function that is automatically executed when an object of a class is created. In Python, there is a special function called “init” which act as a Constructor. It must begin and end with double underscore. This function will act as an ordinary function; but only difference is, it is executed automatically when the object is created. This constructor function f can be defined with or without arguments. This method is used to initialize the class variables.

Question 21.
Write a program to print the following output.
Answer: 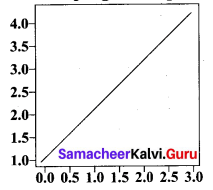 Example
import matplotlib.pyplot as plt
plt.plot([l ,2,3,4])
plt.show()
Output
This window is a matplotlib window, which allows you to see your graph. You can hover the graph and see the coordinates in the bottom right.

Question 26.
Write note on CSV files.
Answer:
CSV File cannot store charts or graphs. It stores data but does not contain formatting, formulas, macros, etc.
A CSV file is also known as a Flat File. Files in the CSV format can be imported to and exported from programs that store data in tables, such as Microsoft Excel or Open Office Calc.

Question 27.
Write note on where clause in SQL.
Answer:
The WHERE clause is used to filter the records. It helps to extract only those records which satisfy a given condition. For example in the student table, to display the list of students of age 18 and above in alphabetical order of their names, the command is given as below: SELECT * FROM Student WHERE Age>=18 ORDER BY Name;

To display the list of students in the descending order of names of those students of age 18 and above the command is given as :
SELECT * FROM Student WHERE Age>= 18 ORDER BY Name DESC;

Question 28.
Give an example and syntax for group by clause.
Answer:
The syntax for the GROUP BY clause is
SELECT <column-names> FROM <table-name> GROUP BY <column-name>HAVING condition];
To apply the above command on the student table :
SELECT Gender FROM Student GROUP BY Gender;
The following command will give the below given result:
Gender
M
F

The point to be noted is that only two results have been returned. This is because we only have two gender types ‘Male’ and ‘Female’. The GROUP BY clause grouped all the ‘M’ students together and returned only a single row for it. It did the same with the ‘F’ students. For example to count the number of male and female students in the student table, the following command is given :

Question 31.
Give any 3 applications of scripting language.
Answer:

(b) Explain any 5 important features of python over C++.
Answer:

(b) Explain the various characteristics of an Algorithm.
Answer:

Question 38.
(a) Explain literals in python.
Answer:
Literal is a raw data given in a variable or constant. In Python, there are various types of literals.
(i) Numeric (ii) String (iii) Boolean

(iii) Boolean Literals: A Boolean literal can have any of the two values: True or False.

(iv) Escape Sequences: In Python strings, the backslash “\” is a special character, also called the “escape” character. It is used in representing certain whitespace characters: “\t” is a tab, “\n” is a newline, and “\r” is a carriage return. For example to print the message “It’s raining”, the Python command is
>>> print (“It\’s rainning”)
It’s rainning
Python supports the following escape sequence characters.

(b) Explain Recursive functions in python.
Answer:
When a function calls itself is known as recursion. Recursion works like loop but sometimes it makes more sense to use recursion than loop. You can convert any loop to recursion.

Overview of how recursive function works
(i) Recursive function is called by some external code.
(ii) If the base condition is met then the program gives meaningful output and exits.
(iii) Otherwise, function does some required processing and then calls itself to continue recursion. .