Question 2.
The process of providing only the essentials and hiding the details is called
(a) modularity
(b) structure
(c) tuple
(d) abstraction
Answer:
(d) abstraction

Question 3.
All members in a python class are by default.
(a) private
(b) public
(c) protected
(d) local
Answer:
(b) public

Question 16.
What are the two types of parameter passing?
Answer:

Question 17.
What is mapping?
Answer:
The process of binding a variable name with an object is called mapping. = (equal to sign) is used in programming languages to map the variable and object.

Question 18.
Write note on delimiters.
Answer:
Python uses the symbols and symbol combinations as delimiters in expressions, lists, dictionaries and strings. Following are the delimiters.

Question 19.
Write note on range () in loop.
Answer:
Usually in Python, for loop uses the range() function in the sequence to specify the initial, final and increment values. range() generates a list of values starting from start till stop-1.

Question 25.
Give the syntax for getopt module.
Answer:
The syntax for this method
<opts>, <args>= getopt.getopt( argv, options, [long_options])
Here is the detail of the parameters –

Question 33.
Explain Intersection with example.
Answer:
Intersection (symbol: ∩) A ∩ B
Defines a relation consisting of a set of all tuple that are in both in A and B. However, A and B must be union-compatible.
Example:

Question 34 (a).
Explain various types of variable scope.
Answer:
There are 4 types of Variable Scope, let’s discuss them one by one:
Local Scope:
Local scope refers to variables defined in current function. Always, a function will first look up for a variable name in its local scope. Only if it does not find it there, the outer scopes are checked.
Look at this example

On execution of the above code the variable a displays the value 7, because it is defined and available in the local scope.

When a compiler or interpreter search for a variable in a program, it first search Local, and then search Enclosing scopes.
Consider the following example.

Built-in Scope:
Finally, we discuss about the widest scope. The built-in scope has all the names that are pre-loaded into the program scope when we start the compiler or interpreter. Any variable or module which is defined in the library functions of a programming language has Built-in or module scope. They are loaded as soon as the library files are imported to the program.

Normally only Functions or modules come along with the software, as packages. Therefore they will come under Built in scope.

The above function square is a pure function because it will not give different results for same input.
There are various theoretical advantages of having pure functions. One advantage is that if a function is pure, then if it is called several times with the same arguments, the compiler only needs to actually call the function once. Lt’s see an example:

If it is compiled, strlen (s) is called each time and strlen needs to iterate over the whole of ‘s’. If the compiler is smart enough to work out that strlen is a pure function and that ‘s’ is not updated in the loop, then it can remove the redundant extra calls to strlen and make the loop to execute only one time. From these what we can understand, strlen is a pure function because the function takes one variable as a parameter, and accesses it to find its length. This function reads external memory but does not change it, and the value returned derives from the external memory accessed.

Question 35 (a).
Explain selection sort.
Answer:
The selection sort is a simple sorting algorithm that improves on the performance of bubble sort by making only one exchange for every pass through the list. This algorithm will first find the smallest elements in array and swap it with the element in the first position of an array, then it will find the second smallest element and swap that element with the element in the second position, and it will continue until the entire array is sorted in respective order. This algorithm repeatedly selects the next-smallest element and swaps in into the right place for every pass. Hence it is called selection sort. 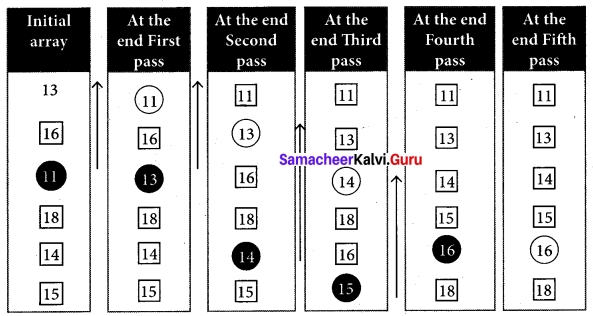 Then leaving the first element, next smallest element will be searched, from the remaining elements. We will get 13 as the smallest, so it will be then placed at the second position.

Then leaving 11 and 13 because they are at the correct position, we will search for the next smallest element from the rest of the elements and put it at third position and keep doing this until array is sorted. Finally we will get the sorted array end of the pass as shown above diagram.

(b) Explain operators in python.
Answer:
Operators:
In computer programming languages operators are special symbols which represent computations, conditional matching etc. The value of an operator used is called operands. Operators are categorized as Arithmetic, Relational, Logical, Assignment etc. Value and variables when used with operator are known as operands.
(i) Arithmetic operators:
An arithmetic operator is a mathematical operator that takes two operands and performs a calculation on them. They are used for simple arithmetic. Most computer languages contain a set of such operators that can be used within equations to perform different types of sequential calculations.
Python supports the following Arithmetic operators. 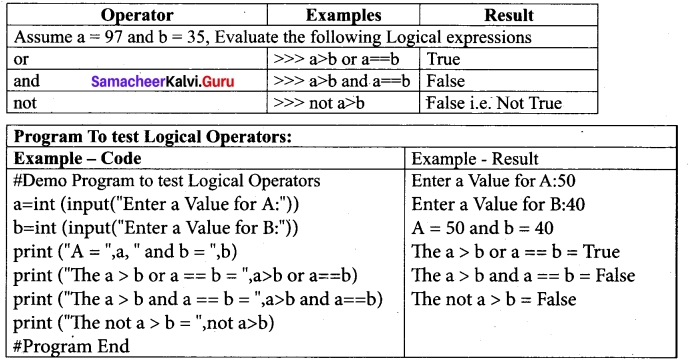 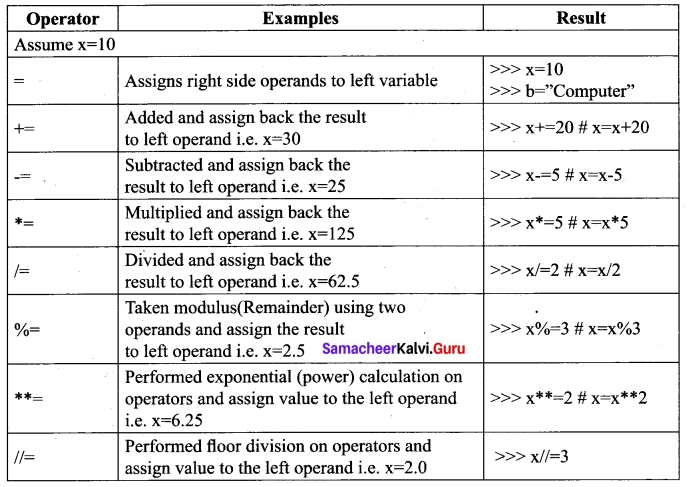 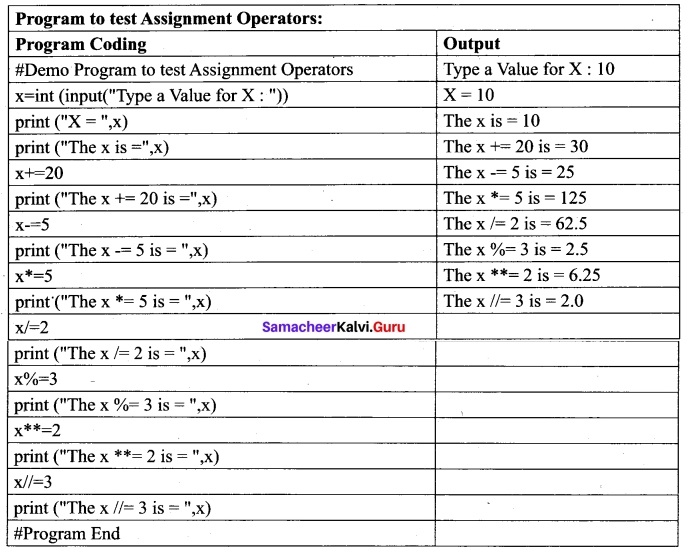 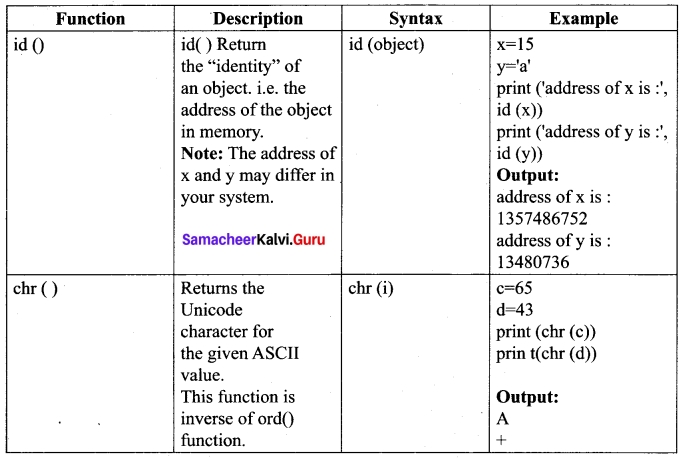 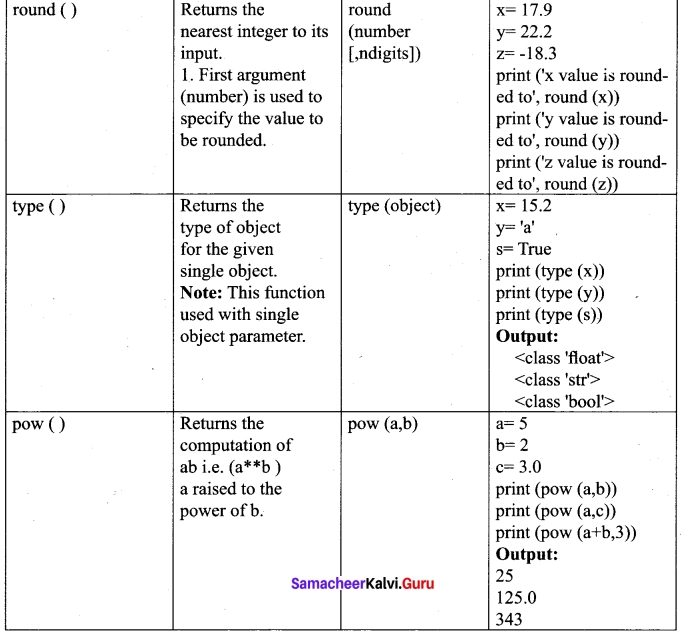 In the above codes, >>> del MySubjects [1 : 3] deletes the second and third elements from the list. The upper limit of index is specified within square brackets, will be taken as -1 by the python. 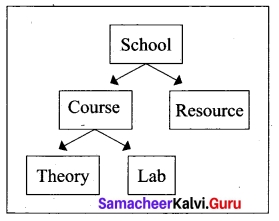 In Hierarchical model, data is represented as a simple tree like structure form. This model represents a one-to-many relationship i.e. parent – child relationship.

One child can have only one parent but one parent can have many children. This model is mainly used in IBM Main Frame computers.

2. Relational Model:
The Relational Database model was first proposed by E.F. Codd in 1970 . Now a days, it is the most widespread data model used for database applications around the world. 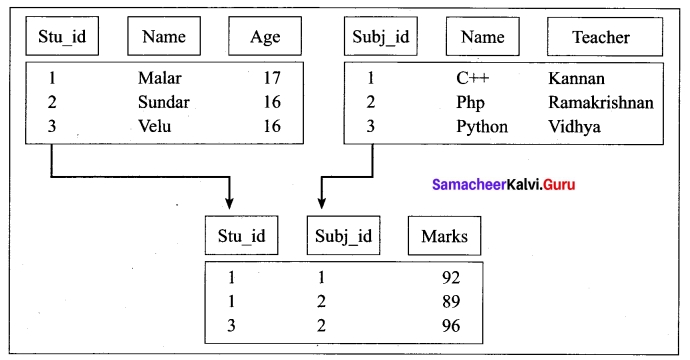 This model is easier and faster to access the data

4. Entity Relationship Model.
In this database model, relationship are created by dividing the object into entity and its characteristics into attributes.

It was developed by Chen in 1976. This model is useful in developing a conceptual design for the database. It is very simple and easy to design logical view of data. The developer can easily understand the system by looking at ER model constructed.

5. Object Model
Object model stores the data in the form of objects, attributes and methods, classes and Inheritance. This model handles more complex applications, such as Geographic information System (GIS), scientific experiments, engineering design and manufacturing. It is ‘ used in file Management System. It represents real world objects, attributes and behaviors. It provides a clear modular structure. It is easy to maintain and modify the existing code. 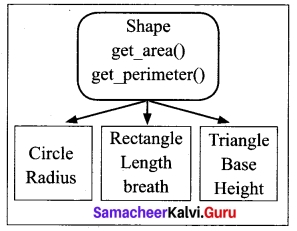 An example of the Object model is Shape,
Circle, Rectangle and Triangle are all objects in this model.

(b) Explain creating a New Normal CSV file with syntex and program.
Answer:
Creating A New Normal CSV File
When you have a set of data that you would like to store inside a CSV file, it’s time to do the opposite and use the write function.
The csv.writer() method returns a writer object which converts the user’s data into delimited strings on the given file-like object. The writerow() method writes a row of data into the specified file.

You can create a normal CSV file using writer() method of csv module having default delimiter comma (,)
Here’s an example.
The following Python program converts a List of data to a CSV file called “Pupil.csv” that uses, (comma) as a value separator.

When you open the “Pupil.csv” file with a text editor, it will show the content as follows.