You can Download Samacheer Kalvi 8th Science Book Solutions Guide Pdf, 8th Science Matter Around Us, Tamilnadu State Board help you to revise the complete Syllabus and score more marks in your examinations.

I. Choose the best answer

8th Science Matter Around Us Question 1.
Matter is composed of –

8th Science Guide Matter Around Us Question 2.
The liquid metal used in thermometers is –
(a) Copper
(b) Mercury
(c) Silver
(d) Gold
Answer:
(b) Mercury

Matter Around Us Class 8 Question 3.
The Pictorial symbol for water given by the alchemists was –

Matter Around Us Class 8 Samacheer Question 4.
Which one of the element name not derived from planet?
(a) Plutonium
(b) Neptunium
(c) Uranium
(d) Mercury
Answer:
(d) Mercury

Matter Around Us Class 8 Textbook Question 6.
A form of non – metal which has high ductility is –
(a) Nitrogen
(b) Oxygen
(c) Chlorine
(d) Carbon
Answer:
(d) Carbon

Matter Around Us Lesson In 8th Class Question 8.
The property which allows metals to be hammered into their sheets is –
(a) Ductility
(b) Malleability
(c) Conductivity
(d) Tensile strength
Answer:
(b) Malleability

8th Class Matter Around Us Lesson Question 9.
The non – metal which conduct current is –
(a) Carbon
(b) Oxygen
(c) Aluminium
(d) Sulphur
Answer:
(a) Carbon

III. True or False, if false correct the statement

Matter Around Us Class 8 Textbook PdfQuestion 3.
Compounds can be made up of one atom.
Answer:
False.
Correct statement:
A compound is formed due to the chemical combination of two or more elements.

Matter Around Us Class 8 Pdf Download Question 5.
Zinc is highly ductile in nature.
Answer:
False.
Correct statement:
Zinc is neither ductile nor malleable at room temperature.

IV. Match the substance given in column A with their use given in Column B

Question 3.
Identify the state of matter based on the arrangement of the molecules.

Kalvi Guru 8th Science Question 1.
What is ductility?
Answer:
Metals can be drawn into thin wires. This property of metals is called ductility.
Example : Copper wires.

8th Science Solution Guide Question 2.
Write the constituent elements and their symbols for the following compounds

Matter Around Us 8th Class Question 3.
Write the symbols for these elements

Samacheer Kalvi 8th Science Solution Question 6.
Why are bells made of metals?
Answer:
On being hit, metals produce a typical sound. They are said to be sonorous. This property is being made used in making bells.

Symbol of an element signifies:

Question 3.
Define tensile strength.
Answer:
Metals have the capacity to withstand strain without breaking. This property is called tensile strength. It is the property that owes the use of iron for the construction of railway tracks.

Question 4.
Why are utensils made up of aluminium and brass?
Answer:

Question 5.
Define a Alchemy.
Answer:
Alchemy was form of chemistry studied in the middle age, which was concerned with trying to discover ways to change ordinary metals into gold.

Question 9.
Mention the metals that are used in jewellery.
Answer:
Silver and gold are used for making jewels and in decorative purposes

Question 10.
Mention the uses for the following compounds.

Question 1.
Give reasons for the following.

Question 4.
The metal which is stored in kerosene
(a) phosphorous
(b) Magnesium
(c) Sodium
(d) Gold
Answer:
(c) sodium

Question 5.
The non – metal which is liquid at room temperature is
(a) Carbon
(b) Iodine
(c) Bromine
(d) Chlorine
Answer:
(c) Bromine

Question 1.
Sodium is a hard metal.
Answer:
False.
Correct statement:
Sodium is a soft metal, it can be cut with a knife.

Question 5.
The other name of potassium hydroxide is caustic potash.
Answer:
True.

Question 1.
Which metal has the highest ductility?
Answer:
The most ductile metals is platinum.

Question 6.
Why are metalloids called semimetals?
Answer:
Some elements neither fit with the metals or with non – metals. Such elements are called semi – metals. They exhibit the properties of metals as well as non – metals.

Question 7.
Name the two elements which are derived from the country.
Answer:
(i) Name : Americum
Symbol : Am
Country : America

Example : The symbol O stands for the element of oxygen. One atom of oxygen.

Question 3.
Tabulate the some important compounds that exist in gaseous state.
Answer:

Question 4.
Answer:
The vapour had purple colour, so the element was given the name after the Greek iodides, which means violet. 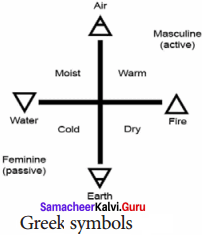 Question 5
Answer:
Write a note on Greem symbols.
Answer:
The symbols in form of the geometrical shapes were those used by the ancient Greeks to represent the four basic elements around us such as earth, air, fire and water. 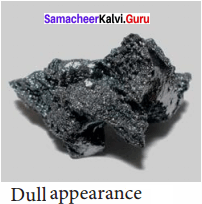 2. Hardness:
Non – metals are generally not hard except diamond, (a form of carbon)

3. Lustre:
Non – metals have a dull appearance; Graphite and iodine are exceptions as they are shiny and lustrous.

4. Density:
Non – Metals are generally soft and have low densities. The exception here is diamond (a form of carbon) which’is the hardest naturally occurring substance

7. Malleability:
Non – metals are non-malleable. If hammered, they form a powdery mass. Actually non – metals in solid state are brittle in nature.

9. Conductivity:
Non – Metals are generally bad conductor of electricity. Graphite (a form of carbon) is exception. 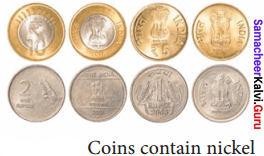 Both inorganic and organic compounds exists in all three states of matter ie., solids, liquids and gases.

In this crossword puzzle, names of 10 elements are hidden. Symbols of these are given below. Complete the puzzle.
Answer: 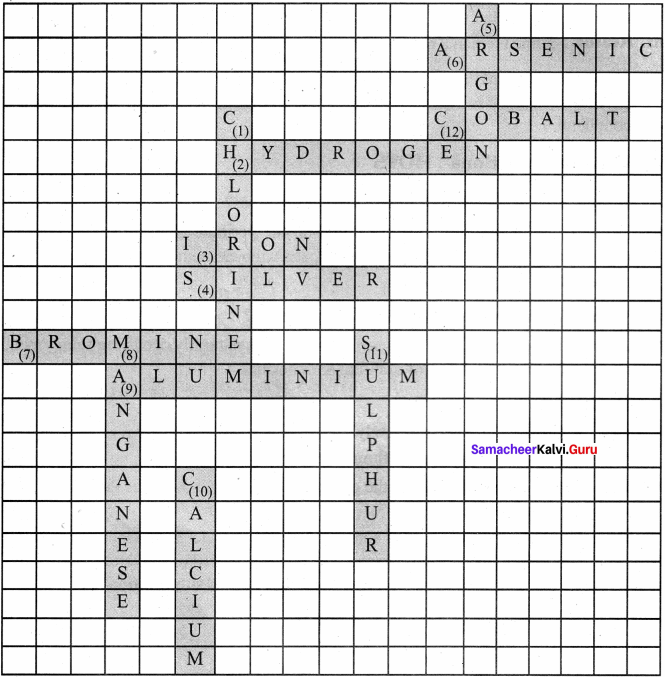 Question 3.
Elements are called semi – metals.
Reason : Some elements neither fit with the metals nor with non – metals.

Question 4.
Mercury is the only metal that is liquid at room temperature.
Answer:
Reason : Mercury has a low melting point, and it is a poor electrical and thermal conductor.

Question 1.
Which letter is never used in any element symbol?
Answer:
The letter “J” is the only one not found on the periodic table. In some countries (eg: Norway, Poland, Sweden. Serbia, Croatia), the element iodine is known by the name jod.

Question 2.
What is the rarest natural element in the earth?
Answer:
Astatine is the rarest element on earth. Astatine is a naturally occurring semi – metal that results from the decay of uranium and thorium.